Remain Strong in His Presence 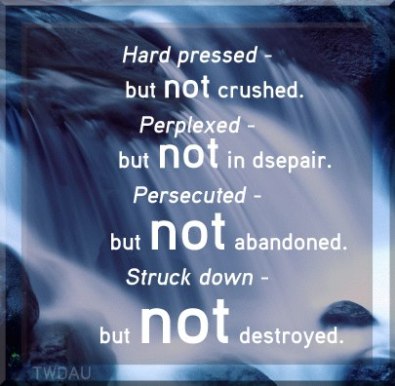 “These words were spoken by the Apostle Paul, who suffered all those things for the cause of Christ. He never got over the fact that he had started out as a cruel persecutor of Jesus’ followers. All that changed when he met personally met Jesus while on the road to Damascus, intending to imprison Christians and have them put to death. When the post-crucifixion Jesus challenged him with the question, “Paul, Paul!! Why are you persecuting me?” Paul fell on his face and was a transformed man : the Missionary, and not the Persecutor. Paul suffered greatly by beatings, imprisonments, and finally death after he appealed his case to Caesar. But Paul had seen Heaven, so NOTHING but death could stop his tenacious work of spreading the Gospel of Jesus Christ. Paul: Apostle to the Gentiles was last heard of when he was imprisoned in Rome and was reportedly beheaded for his faith in Jesus the Christ.”

Picture shared from ‘The Word Dwelling Among Us.’

because anything is possible with Charisma